The Billionaire’s Obsession: The Complete Collection Boxed Set (Mine For Tonight, Mine For Now, Mine Forever, Mine Completely).

Masked Encounters Book #1
Korah Daniels has been through a lot in her nineteen years. Broken hearts, abusive relationships, and horrid dates have caused her to doubt love. When her friend talks her into attending the local frat house’s Halloween party, will she find the one person who can change her outlook on life?

Dane Davidson is the worst kind of playboy. The ultimate frat boy, drinking and ending up with a different girl every night. When his frat house throws a masked Halloween party, a certain angel catches his attention and may just turn his life upside down.
Masked Encounters is the first in a five part novelette series.

Felicia Tatum was born and raised in Tennessee. She always loved reading, and at the age of twelve began writing. Her passion for creating stories grew and in May 2012, she finally wrote her first novel, The White Aura.

She still lives in Tennessee with her daughter and her kitty. She loves cooking, books, and animals are some of her best friends. She watches a lot of Disney channel and often dreams up new book ideas. She’s currently working on various projects, including the rest of the White Aura Series, the Scarred Hearts Series, and a novella series. Her dream is to write as many books as possible while entertaining as many people as possible. 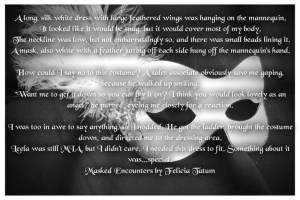